Radiation and the “Inverse-Square” Law

If you have done the FARLabs Nuclear → Turntable experiment, you would know that radiation comes in many forms, including alpha, beta and gamma radiation. BUT did you know that regardless of the type, ALL kinds of radiation are emitted from the source in the same way?

Each little piece of radiation (alpha particle, beta particle or gamma ray) is emitted from the source in a RANDOM direction. It then travels in more or less a straight line.

Imagine two gamma-rays emitted from the same place, but in slightly different directions. As they move away from the source, they get further and further away from EACH OTHER. They are spreading out.

You might like to try this with people in your class room. Stand next to each other then all start walking in slightly different directions, but all walking in your own straight line. You will notice that you get further from each other as you walk.

Here are some examples of this!

Here, a nuclear test sends damaging particles in all directions. A single particle will do just as much damage 20 kilometres away as it will 2 kilometres away. But if the target is closer, A LOT more particles will hit it! 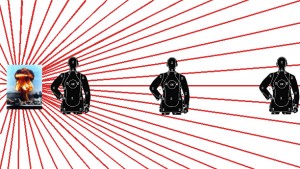 Below is a picture of water being sprayed from a hand-held pump. Water droplets sprayed from the nozzle come out in many directions. If you are very close to the spray, you get very wet. Further away, you just get a little damp! 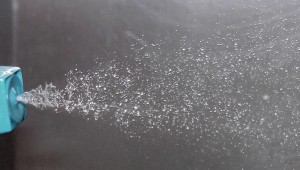 If the distance from the source doubles:

So the number of particles per square metre is quartered.

What does “inverse-square” mean – a more advanced explanation 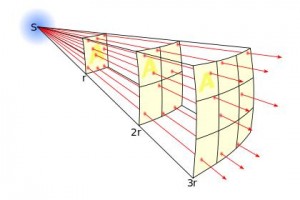 The inverse-square law. The same number of particles passing through an increasing area means the particles per square metre decreases with distance.