October 2013: High school students learn how to draw pictures on a strand of human hair

Can a year 11 student learn how to operate a half-million dollar scientific instrument in five days? This is the question we set out to answer with the FAR-Labs pilot visit. During school midterm, from the 30th September to the 4th October 2013, four Year 11 students from Penleigh and Essendon Grammar School visited the Department of Physics at La Trobe University. On Monday, the students were introduced to the Atomic Force Microscope, an instrument which takes images at nanoscale resolution by ‘feeling’ a surface using a tiny pointed stick. By Wednesday, they were operating the instrument independently, and using it to draw microscopic pictures on strands of their own hair. 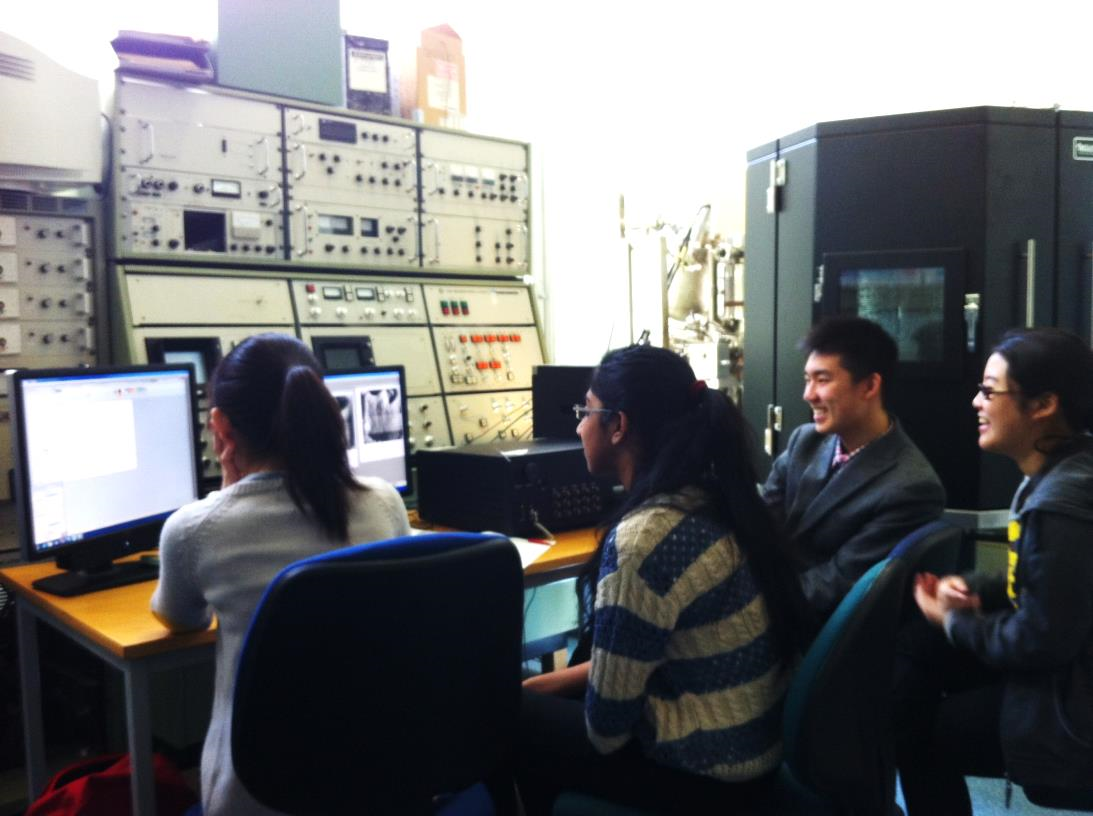 “Being able to work with professionals and the AFM was truly an incredible experience… All in all, any science fanatic should get involved in this program!” Chloe 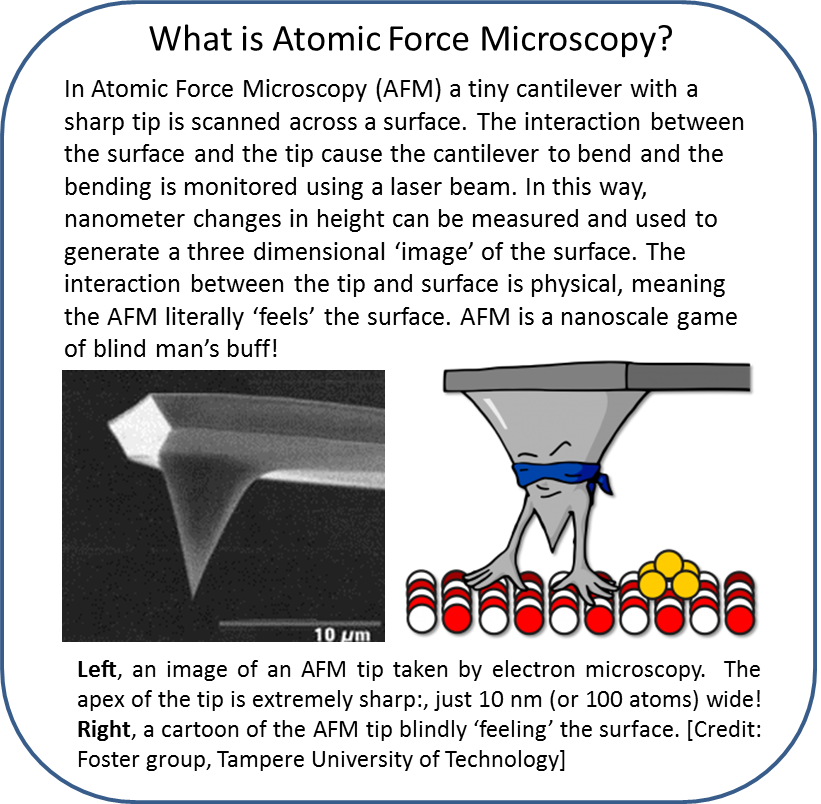 We began with an introduction to the Atomic Force Microscope (AFM). The AFM is an important instrument in nanoscience, because it allows us to visualize objects which are so small that they are literally ‘invisible’. Objects much smaller than the wavelength of visible light cannot be resolved with an optical microscope. Instead, AFM allows us to ‘feel’ their shape. 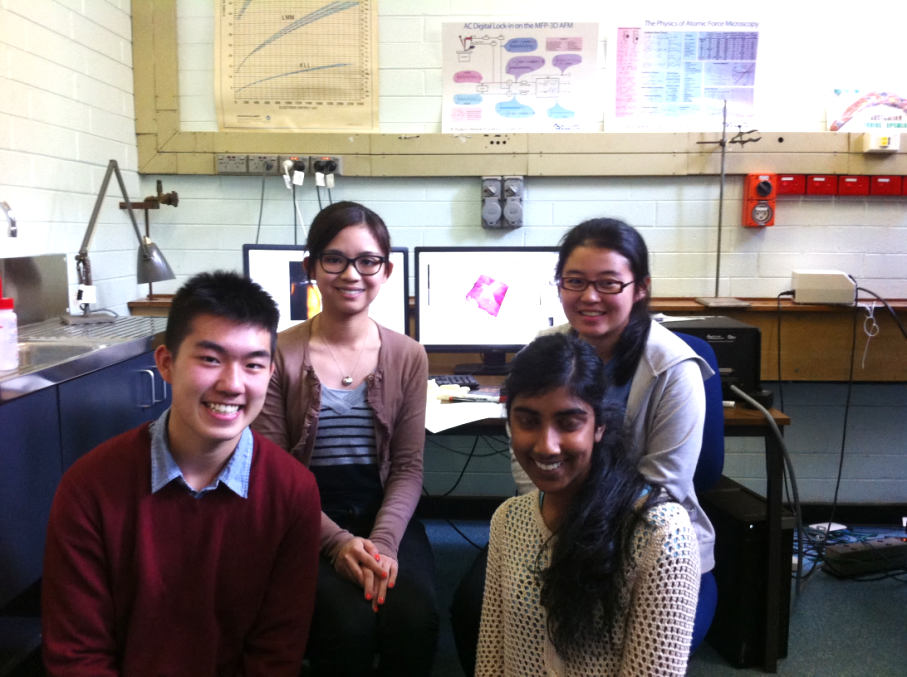 Meet the students. In the front sit Richi and Mahisha. In the back (left to right) are Chloe and Kim.

The next step for the students was to learn how to operate the AFM. They were trained in how to set-up the instrument and how to prepare sample in order to take high resolution images. 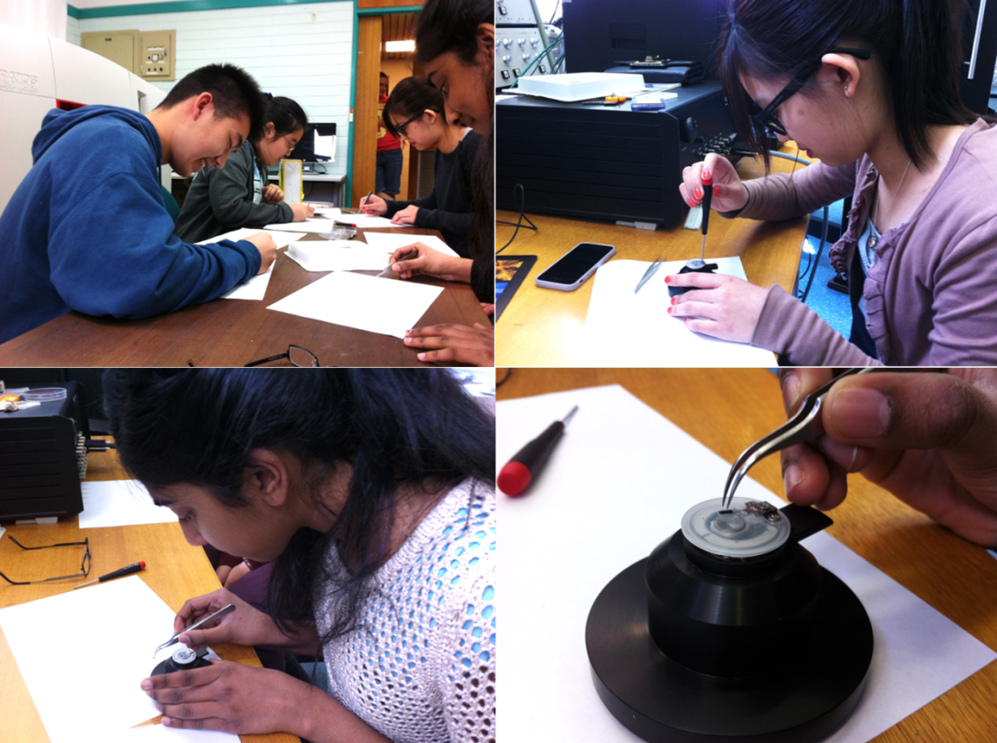 “We learnt about the procedures of loading and operating the AFM with the guidance of very helpful scientists, and really enjoyed working with this incredible microscope to do imaging and lithography on our hair samples. Not only did this project teach us a lot about the applications of the AFM, but it also allowed us to let out our inner creativity.” Mahisha 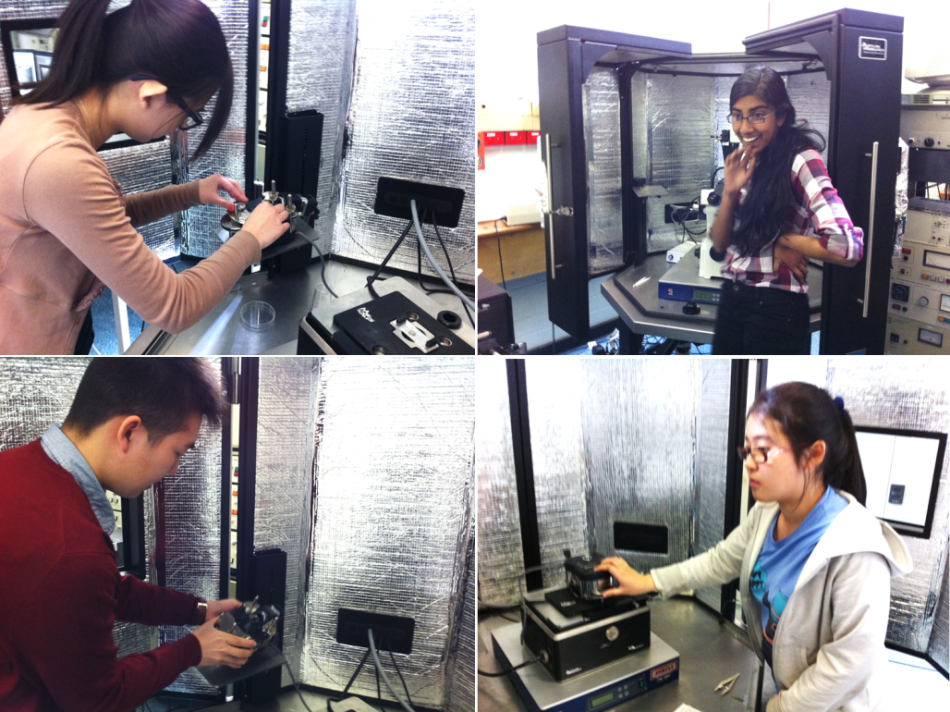 The AFM is the small metal box in Richi’s hands (bottom left). It is housed in an ‘isolation chamber’ to protect it from sound vibrations and electrical noise. Here the students are learning how to load the sample and how to focus on it. 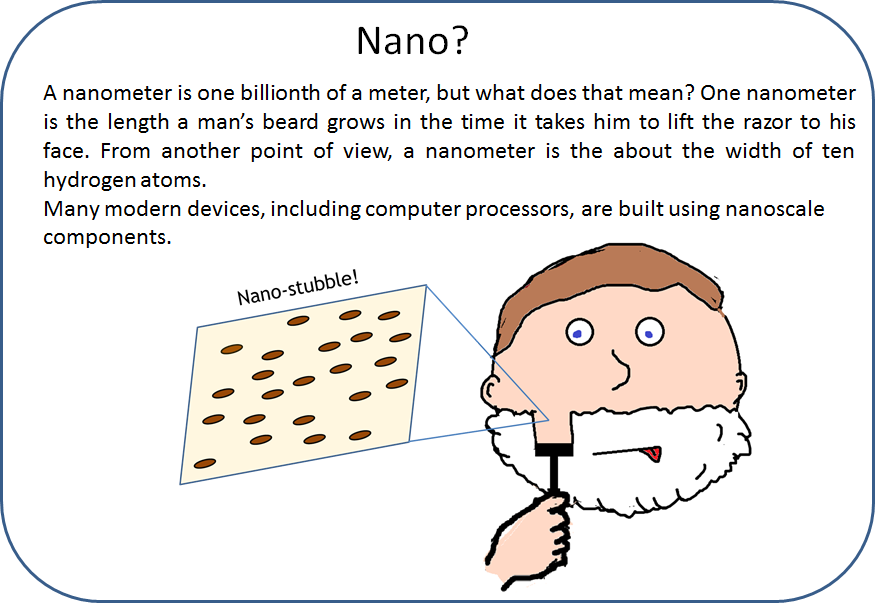 The students were shown how to take images of strands of their hair. They had to rapidly become comfortable with the operational software: learning how to optimise the feedback parameters to achieve high quality images. Besides hair, the students also took images of the microscopic bits on a CD stamp, and even of bacteria! 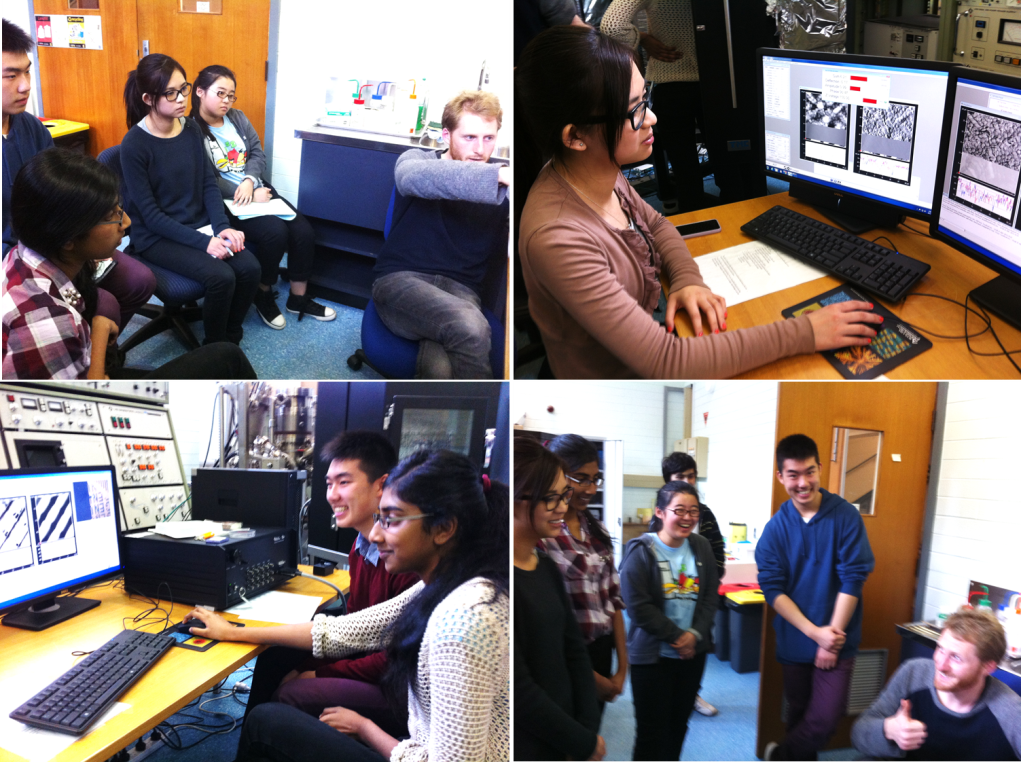 The students rapidly learned how to operate the expensive equipment. By day 3, they were working independently. 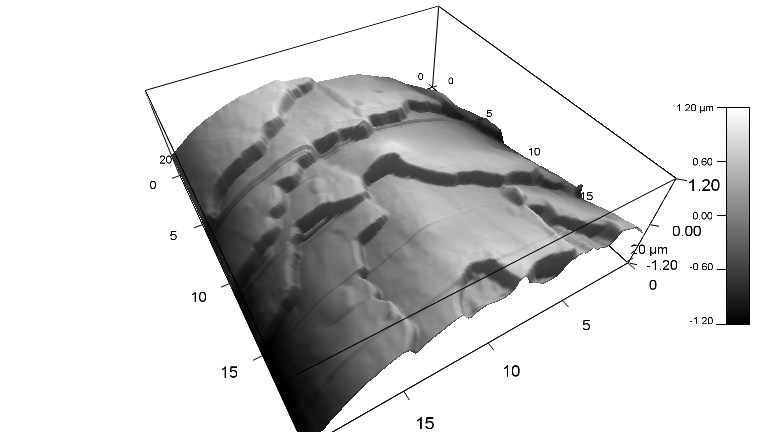 This is a 3D rendered AFM image of a strand of Chloe’s hair. The high resolution image reveals the overlapping plates (cuticles) which form the outer surface of the strand.

The students performed experiments to determine if it were possible to scratch images in the surface of human hair. They optimised the parameters for scratching, by systematically varying the applied force and the scratching speed and then observing the results. The optimum parameters were then used to define microscopic patterns of dolphins, owls, and the students’ names! 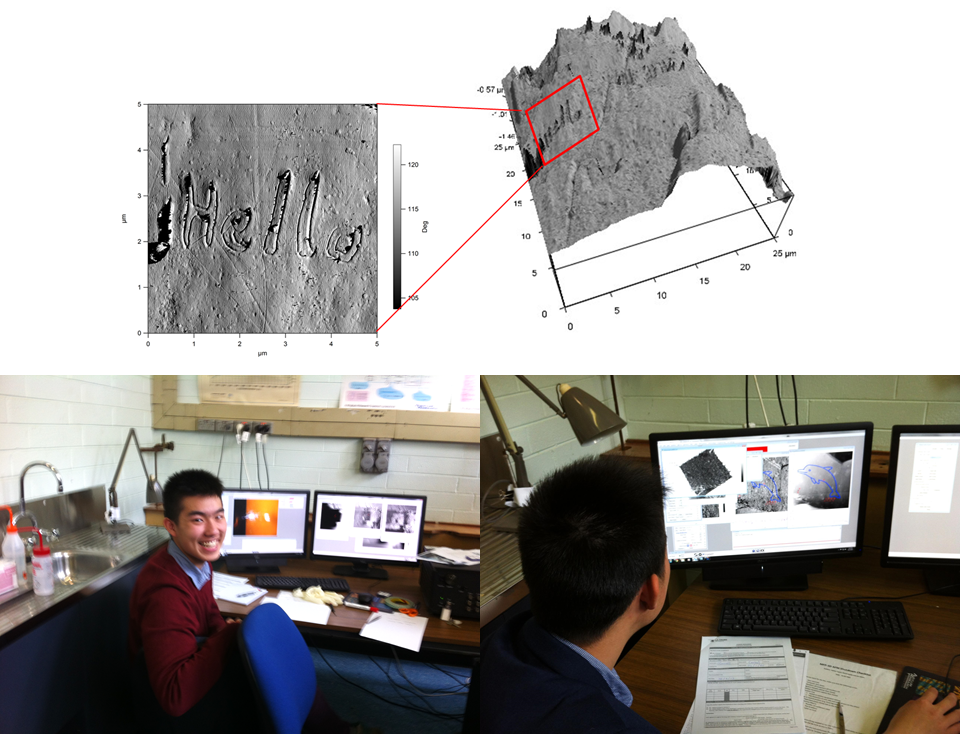 Top: the word ‘Hello’ written on a strand of Mahisha’s hair. Bottom: Richi is loading a picture of a dolphin into the lithography software of the AFM. He is about to use the AFM tip to scratch this pattern into a strand of his own hair.

“With the help of awesome scientists and expensive machines, we etched drawings of dolphins and moustaches into our hair. Pushing the boundaries of science and doing something probably no one has ever done before is by far the best way to spend a week of holidays.” Richi 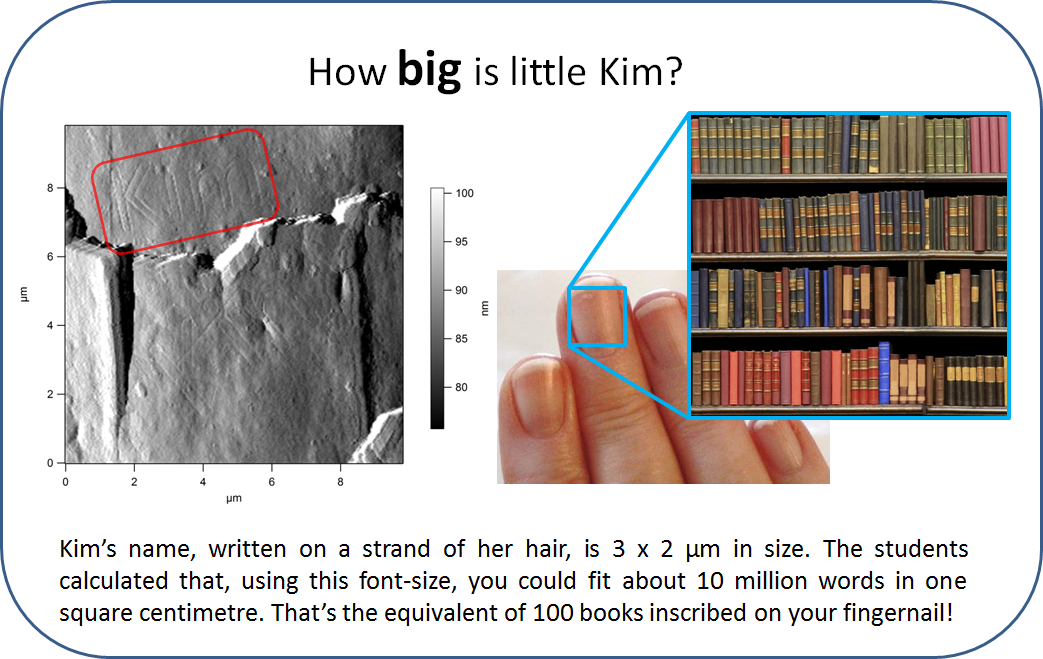 Within days, the students were operating the instrumentation independently. They had acquired the skills to set-up the system, to load the sample of human hair, to focus on it, to take an image, to optimise the lithography parameters of controlled force and speed, to load a pattern into the lithography software, to draw that pattern and then to image the result. A productive week!

Left: The students had to work together to set up the instrument. Richi is aligning the laser onto the AFM cantilever, while Mahisha runs the computer software. Right: a moustache pattern created by the students measures about 7 µm across. That’s the size of a single red blood cell! Watch the webinar video where the kids will take you through the making of this mini-moustache!

“It was an amazing experience and we were able to learn new things and meet interesting people. Definitely recommended!” Kim

Watch the webinar video where the kids will take you through the making of a mini-moustache!