Want to know the best way to avoid radiation poisoning? RUN AWAY!

Radiation can travel a very very long way. Think of the radiation from the sun, which is a long way away, but still bombards the earth. And the light from very distant stars, including Gamma rays, can still reach us.

However, the distance you are away from the source of the radiation is still very important.

Two examples of putting distance between people and radiation are the Chernobyl and Fukushima Daiichi nuclear accidents. After the nuclear accidents at each power plant, “exclusion zones” were set up so that people wouldn’t live, or go too close, to these radioactively contaminated areas. 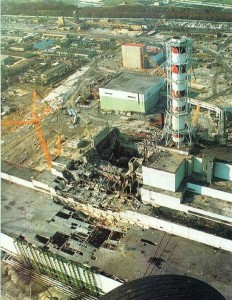 The Chernobyl nuclear reactor after the disaster.

The Chernobyl nuclear accident occurred on the 26th of April 1986 at the Chernobyl Nuclear Power Plant in Ukraine. During an experiment being run to test a safety emergency core cooling feature (which are very important in stopping the reactor from overheating and causing a meltdown) the core exploded and released huge quantities of radioactive particles into the atmosphere that spread over most of Europe. Below, there are pictures of the reactor after the accident and a picture showing the increase in radiation levels in Europe after the explosion.

Level of background radiation increase across Europe one week after the Chernobyl disaster. Notice how the dose level decreases quickly from 100 times the normal dose rate near Chernobyl, back to the normal background rate as you move further away.

Here is a news report on the area 25 years after the disaster.

The Louis Slotin Incident in 1946 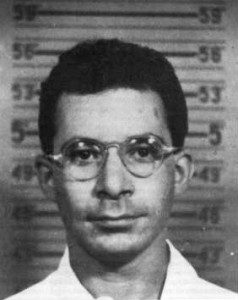 Before the age of nuclear power plant accidents there was Louis Slotin. He was a Canadian physicist who on the 21st of May 1946, performed an experiment to show how the first steps of a nuclear reaction would be created (although he didn’t intend on actually doing it!) by placing two half spheres of Beryllium around a Plutonium core. As long as the spheres were separated, nothing would happen and Slotin kept them apart using a screwdriver. As with most accidents involving radiation, human error and carelessness resulted in his hand holding the screwdriver slipping and letting the two half spheres come into contact. This started an immediate nuclear reaction releasing an intense burst of radiation.

Scientists in the room said they saw a blue glow and felt a heat wave. Slotin said he experienced a sour taste in his mouth and burning in his left hand.

Several people in the room that day, including Slotin, would eventually die of conditions related to radiation exposure. The amount of radiation they received and the severity of their illnesses can be directly related to where they were in the room at the time! 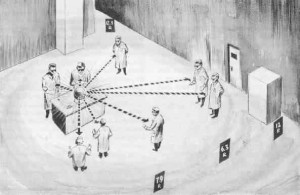 Drawing of the positions of everyone in the room when Slotin accidentally set off the reaction that killed him.

In this remote laboratory experiment you will investigate exactly how distance is related to the intensity of radiation absorbed and what relationship they have.