Why do we need so many projections to make a 3D image? The reason is that it’s difficult to tell the relative positions of objects. From a single projection, we can’t really tell the positions of the constituent parts. Even for simple objects, we can create a situation that shows this process. In the example below, pretend that we don’t know what the object (the blue squares) looks like. The only information we have is the projected information – in this case, the green line which is proportional to intensity. We have to infer information about the object using the projected information.

Clearly, from this single perspective, we have a problem because we see that the three different objects produce the same projected information – in fact there are many more objects that will produce the same result. If we only had this one projection, we could not say for certain what the object looks like. If we take another projection from a different angle, we get the situation shown below:

This has improved the situation (since one object now looks different), but there is still some ambiguity, since two of the objects create the same projection. If we take one final projection, as shown below:

we see that all the objects look different from the projected information. It is important to note that this doesn’t mean that we only need the bottom projection (the bottom row). If we don’t know what the object looks like, there’s no way of deciding which projection we should take. Therefore, the entire collection of projections is important – in this simple example, we’ve only shown three (the columns) for each object. You can imagine that for really complicated objects, say, a human hand, we would need to take lots of projections in order to build an accurate 3D picture of the object.

We can also use a simple simulation to show this effect mathematically. Consider the picture below. Each box contains a number that is proportional to the density of the object. The more dense the object, the more x-rays it will absorb – high numbers like 7 or 9 might represent bone or teeth but low numbers like 2 or 3 might be soft tissue. 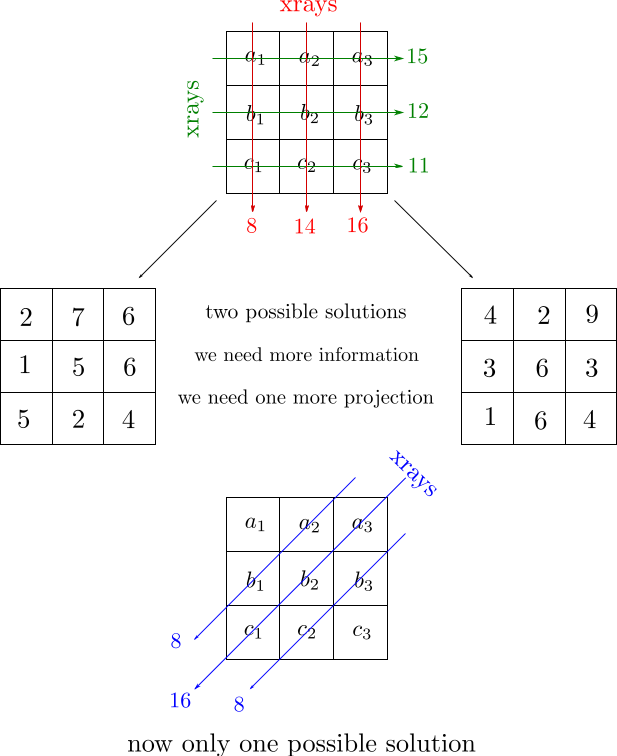 With only two projections we get the total absorption as the x-rays pass through the object. Using the accumulated absorption we can work backwards and generate two possibilities for the distribution of absorption within the material. To reduce this to only one possibility we take one more projection and eliminate one of the two possible solutions.