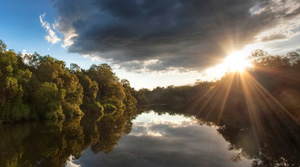 The Bureau of Meteorology has weather stations located all over Australia. These automatic stations measure many things of interest, including temperature, humidity, rainfall, pressure, wind speed and wind direction. This data is used to produce the weather reports you see on the news and to help forecast the weather into the future.

We all know that the Sun warms us during the day and disappears at night. First let’s see what the rising and setting of the Sun looks like in the weather data.

Click here to see the power generated throughout the day by solar cells mounted on the roof of La Trobe University in Melbourne and Curtin University in Perth.

Question: at what time of the day is the solar cell generating the most power? When is it generating no power?

Extension Question: Plot a 3-day period of solar cell power for the month of April. Estimate the time of dawn and dusk for both La Trobe University (Melbourne) and Curtin University (Perth) – hint: hover your mouse over the charts to show the time. As you go from one day to the next is the day-time getting shorter or longer?

In Part 1 you will have seen that at night the temperature drop is less in the far north, even though the maximum temperature during the day is higher. The main reason for this is humidity. Humidity is “water vapour” or steam in the air and is created by evaporation from the oceans.

Humidity plays a very important role in the weather. In general, humidity is greater close to the equator, and close to the sea. Let’s look at some humidity data from weather stations at different latitudes.

Temperature and humidity are very closely related in the atmosphere. When the day begins to heat up, the water vapour in the air at ground level can be “burnt off”, rising high into the sky to form clouds.

Did you know? The most humid time of day is just before dawn.

Part 4: The seasons of Kakadu and far northern Australia 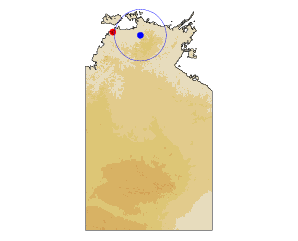 Did you know that in the far north of Australia the seasons are very different to those in the south? In places such as Kakadu National Park in the Northern Territory, the European seasons of Winter, Spring, Summer and Autumn have no meaning at all. The traditional owners of North West Arnhem land and Kakadu National Park identify six distinct seasons: Gudjewg, Banggerreng, Yegge, Wurrgeng, Gurrung, and Gunumeleng. In this section we will explore the differences between these seasons using weather station data. 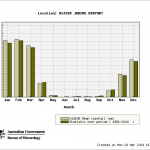 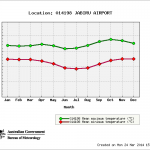 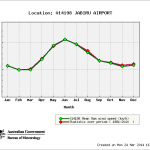 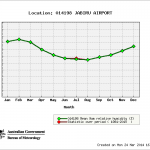 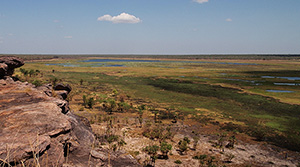 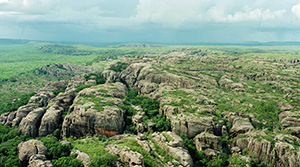 Weather patterns move in particular directions in different parts of Australia and the world. This means that the weather over a particular place (which might include blue skies, rain, heat, cold, everything that makes up the day’s weather) can move, as a whole, to another location nearby the next day. In this exercise you will determine which direction the weather moves in the south of Australia. For example, does it move from east to west, west to east, or perhaps north to south?

Did you know? Low pressure occurs when air is rising upwards to a higher altitude. This is usually the case when you see heavy clouds, rain and strong winds.

Follow this link to see the path followed by Severe Tropical Cyclone Ilsa in March 2009. While tropical cyclones usually travel from east to west, they often have a mind of their own and are very difficult to predict.

Pressure measurements from the very same weather stations you have been using in this remote experiment are all put together to create “synoptic charts”. These are the weather maps of Australia you see on the news.