So what did we just observe?

Why is the force experienced by each house in the direction observed?

As the wind travels over the roof of a building, a pressure is induced to the components. The pressure “felt” by the roof is due to the velocity of the air above (wind). Bernoulli’s Principle states that the pressure exerted by a fluid decreases as its velocity increases. As the velocity of a fluid (or air in our case) increases, the pressure decreases so the static air inside the house has a higher pressure than the fast moving air outside, creating a pressure difference. As the wind speed increases, the pressure difference between the inside and outside of the house (area above the roof) gets larger until it reaches a point where the pressure difference is sufficiently large enough to “pop” the roof off the top of the house. This is due to for things to move from high to low pressure areas. This phenomenon is exploited when designing aeroplane wings in order to maximise lift and help keep it in the air.

If you would like a more detailed explanation of the physics behind this using Bernoulli’s Equation, please watch the video below:

Hurricanes, cyclones, and typhoons all refer to the same type of weather phenomenon. Different names are given to these storms depending on where they occur:

The formation of a tropical cyclone is called “Tropical Cyclogenesis”, from the word “genesis” which means “the origin or mode of formation”. Tropical cyclones begin as low pressure systems over the ocean, and can grow into sustained cyclones if a number of environmental conditions are present. In particular, cyclone formation requires at a minimum: 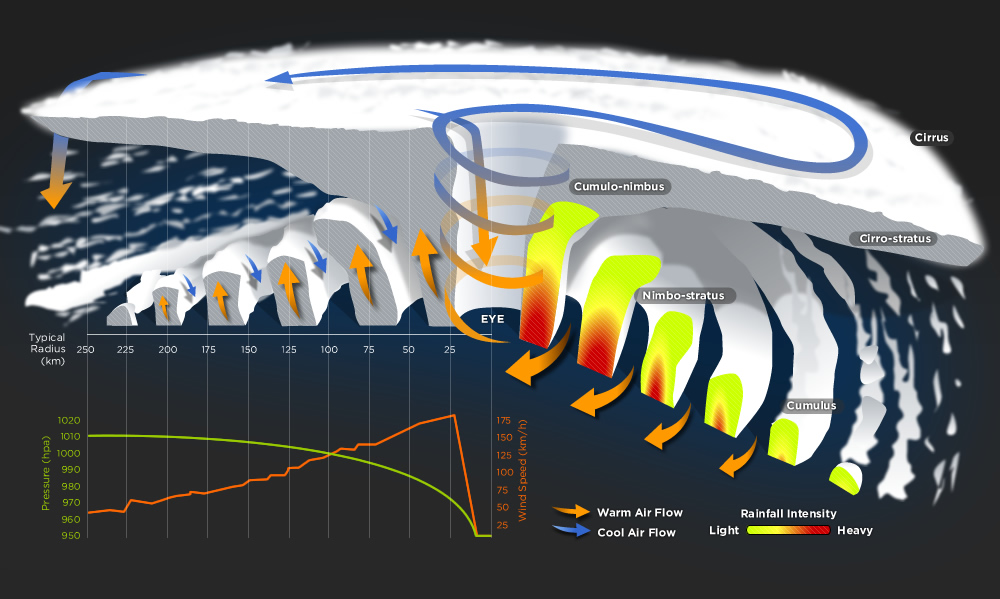