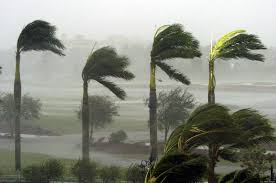 The Role of Weather

Weather has always had a huge effect on peoples lives. Rain provides water for us to drink and grow our food. The sun provides energy to all living things and keeps us warm. And for most of human history, wind has provided the power to travel across the globe. 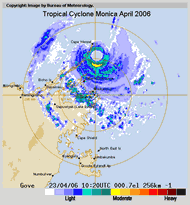 The weather has amazing variety. Calm days with blue skies, overcast and raining, thunder, lightning, burning heat, freezing cold, cyclones, twisters … the changing weather definitely keeps life interesting. The incredible variety of ecosystems in the world is also due to the variety of weather conditions in different regions. Deserts, tropical jungles, snow covered plains and huge forests are all shaped by the local climate.

Monitoring and predicting the weather 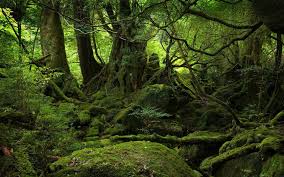 Living in harmony with the environment and surviving has always relied on knowledge of local weather.
Ancient weather prediction relied a lot on patterns. Some were quite obvious like when in the year rain was usually observed. Others were more subtle such as the examples from China below.

Did you know? In traditional Chinese weather lore, hearing crickets chirping at night means the next day will usually bring good weather, and if dragonflies fly up and down in the sky then heavy rain is on the way!

Many of these observed patterns had a rhyme to help remember them. You may have heard the following proverb: 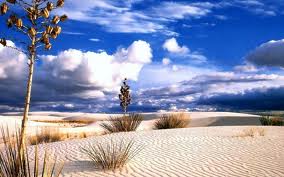 This one makes some sense, since for large parts of the globe (including the southern parts of Australia), weather moves from west to east. A nice red sunset means the air is dusty and dry in the west (since the sun sets in the west). So dry weather is on the way. A red sunrise however means that the nice dry weather is in the east (since the sun rises in the east) and has already passed by. Often a region of cold rainy weather (a low pressure) is drawn in after the passage of hot dry weather (a high pressure). 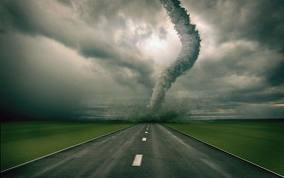 Many ancient cultures have also sought to influence the weather directly using powerful spells and ceremonies. The Egyptians appealed to Ra, the sun god, while the Aztecs made offers of human sacrifices to their rain god to bring rain to make crops grow and for protection from floods. When in doubt, the Aztecs liked to make human sacrifices! Much less brutal are the native African, American and Australian people who performed rain dances to try and make it rain. It is unclear which method was the most effective!

Modern weather prediction only really began with the invention of the telegraph in the mid-1800s. For the first time it was possible to relay information on distant weather to see what was coming your way. Over the last 150 years or so, weather scientists (called “meterologists”) have developed a good understanding of the way weather behaves and moves around by collecting data on temperature, pressure, rainfall and humidity from many many weather stations throughout the world. 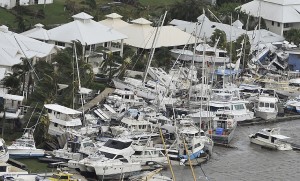 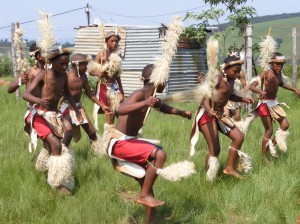 Did you know? There is also weather high above the clouds, known as “space weather”.

Powerful emissions from the Sun impact the Earth at around 100 km altitude driving winds of up to 5000 kph and causing the “aurora”, the beautiful light shows seen in the night sky close to the north and south pole. Below is a movie showing the aurora as seen from the International Space Station!

The sun is a seething mass of nuclear material which is constantly erupting in enormous explosions called solar flares. When a big flare occurs there is often a huge cloud of solar material which leaves the sun and hurtles towards the planets. This is called a Coronal Mass Ejection (CME).

Above left is a movie showing the surface of the sun. At the edges of the sun you can see the solar material arcing out incredible distances as it follows the sun’s magnetic field. When a flare occurs this solar material can escape from the sun and hurtle towards the earth. When the CME reaches the earth it interacts with the magnetic field of the earth in a complicated way, as shown by the movie above right. This interaction can often cause communication problems on earth and the temporary failure of GPS navigation systems. And of course the aurora ….

Below are some photos of aurora seen from earth (click to enlarge). 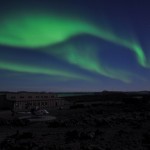 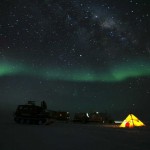 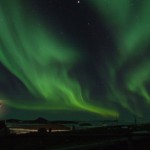 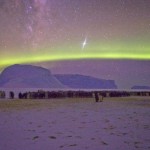 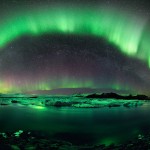 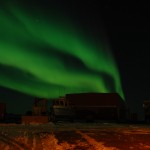