The seasons of Kakadu and far northern Australia

In the far north of Australia the seasons are very different to those in the south.

Did you know? That in the far north in the city of Darwin you can put a lounge setting out in the backyard for 6 months of the year and it will never get wet!.

The traditional owners of North West Arnhem land and Kakadu National Park near Darwin, identify 6 distinct seasons. Intimate knowledge of these seasons was essential to survival for the nomadic people indigenous to this area. The European seasons of Winter, Spring, Summer and Autumn are based around agriculture (when to plant crops) and planning for comfort and shelter from the elements. In the same way, the indigenous seasons of the Kakadu area are based on the coming and going of food sources such as water lilies and magpie geese, and on knowing when to move camp to a safer and more comfortable location.

For the Gundjeihmi-speaking people in Kakadu the 6 seasons have the following names: 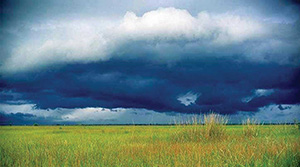 Banggerreng is the “knock em down” season when wild winds and driving rain pushes the long spear grass flat. The winds signal the ending of the wet season. Rain gives way to clear skies. The local people look for other signs that it is Banggerreng:

The weather starts getting cooler in Yegge as the dry season really begins, though it is still quite humid. As the fallen spear grass dries out grass fires pop up everywhere in Kakadu. A smokey haze is in the air for much of the day, with fires usually dying down at night time. Many of the larger trees, called woolly butts, flower at this time.

Wurrgeng is the “cold” weather season in Kakadu (though it is still pretty hot!). There are beautiful blue skies and dry weather during the day and clear starry skies at night. It is a very pleasant time of year in northern Australia. Mornings are cool and the humidity is low. The creeks and waterfalls are starting to dry up though the floodplains are still there. Animals like echidnas are out and about hunting now that it is dryer and golden orb spiders can be seen sitting in their huge webs. Some golden orb spider webs are strong enough to catch a small bird! 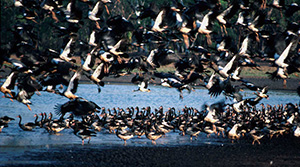 Gurrung is very hot and dry! The humidity is still low and there is usually no rain but it is the hottest time of year. As the floodplains start to dry out, turtles bury themselves in the mud to stay cool. Huge numbers of waterbirds gather near the remaining water as well as wild pigs and water buffalo who like to wallow in the mud.

This season is very hot and very humid! People in Darwin call it the “build-up”. It is probably the most uncomfortable time to be in the top end. In Kakadu the mother crocodiles are nesting on the banks making a mound of mud and grass to lay their eggs in. It is a dangerous time to go near the water! The sweet native plums and apples start to appear. The grass-hoppers moult and shed their skins, transforming into their new colours. The local people call them “Namarrgon’s children”. Namarrgon is the lightning man who can be seen painted on rocks in parts of Kakadu. Namarrgon emerges from his cave during Gunumeleng bringing the first lighting and thunder over the land. 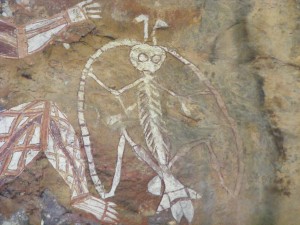