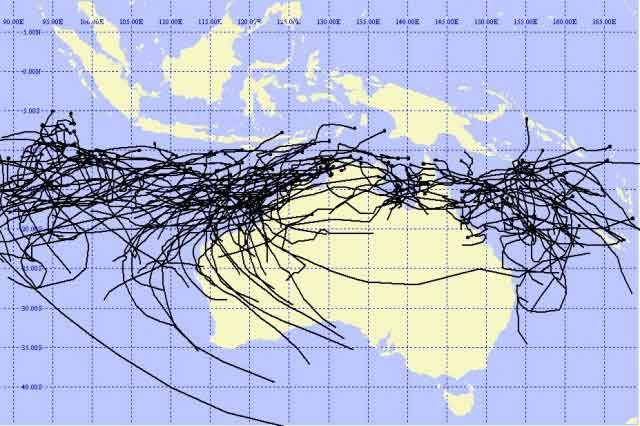 Intense cyclones can often experience short-term fluctuations in their storm tracks. For example, the image below shows the track of tropical cyclone Bobby in February 1995. Bobby made a number of loops (for example near 20:00 on February 23 and 24) before reaching the West Australian coast. Also notice that the time stamps are all spaced three hours apart in time, but the distance between them changes dramatically. This is because Bobby sped up and slowed down as it approached the coast.

You can explore the storm tracks of past cyclones using the Interactive Tropical Cyclone Plotter. 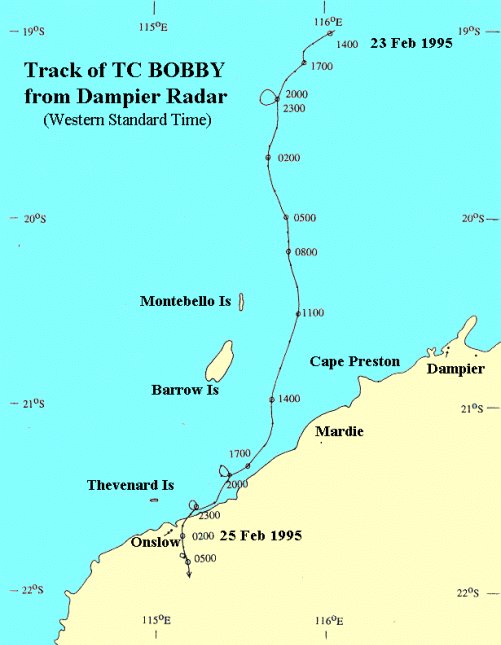 Formation: An active area of thunderstorm activity, usually in the latitude range of 5-15°S. The centre of the activity is usually poorly-defined, but might be indicated by curved cloud bands spiralling in towards it. Maximum wind speed is usually less than gale-force.

Immature: The area of thunderstorm activity becomes more organised as the air pressure at the surface drops below 1000 hPa. Gale-force winds develop in a concentrated region close to the centre as the pressure there drops (increasing the pressure gradient.) The centre of the circulation (around which inward flowing air rotates) is well defined, and the “eye” may begin to form.

Mature: By this stage the tropical cyclone is reasonably stable in terms of the minimum central air pressure and maximum wind speed. Cyclones which are more intense will be characterised by a circular area of thunderstorms and a distinct central “eye”. Typically, this stage will only last about a day before the cyclone begins to decay.

Decay: This is the stage at which the warm core of the cyclone (the engine which drives the whole system) is destroyed. As a result, the central pressure increases, and belt of high winds that was previously concentrated close to the eye expands outward from the centre. 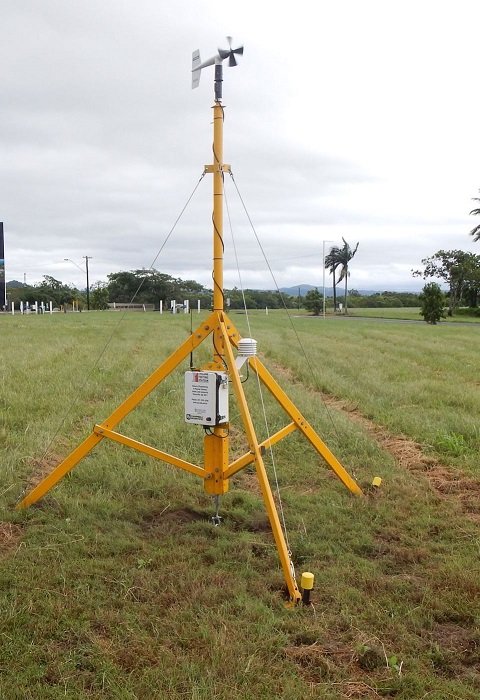 An anemometer deployed by the Cyclone Testing Station.

On April 12, 2014, severe tropical cyclone Ita made landfall at Cape Flattery in far north Queensland. Ita was the strongest tropical cyclone to impact Queensland since Cyclone Yasi in 2011. Prior to Ita’s landfall Dr. David Henderson and his team from the Cyclone Testing Station had deployed a network of anemometers (devices used to measure wind speed) to record data during Ita’s passage.

The image on the right shows one of the anemometer’s the CTS team deployed. In addition to measuring wind speed, these stations also measured atmospheric pressure. These weather stations needed to be capable of surviving the passage of a severe tropical cyclone, during which wind gusts reached 250 kph! To ensure they were not blown away, very long rods were driven into the ground at each foot of the tripod (the yellow caps of these rods are shown in the image).

The anemometers survived Ita’s passage and recorded valuable data that will be used by the Cyclone Testing Station in their research. Click “play” in the box below to watch a visualisation of the data recorded by these anemometers. Ita’s track is indicated by the dashed line, and the estimated “eye” location is shown by the red cross. Arrows show wind speed and direction, and atmospheric pressure is indicated by the graphs. 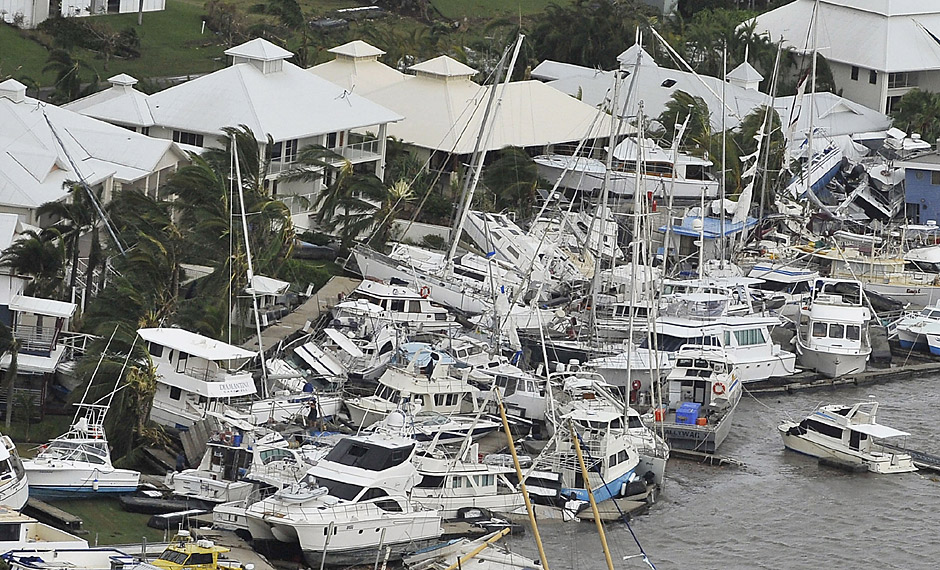 On the morning of February 3, 2011, category 5 cyclone Yasi made landfall near Mission Beach, 138 km south of Cairns, on the far north Queensland coast. The storm brought with it heavy rains and sustained wind speeds of 205 kph, with estimated wind gusts of up to 285 kph. These winds flattened houses, destroyed marinas, and shredded crops. In the south, the cyclone dumped upwards of 400 mm of rain in 24 hours, and a 5 metre tidal surge was observed in Cardwell. The total damage bill was estimated at $800 million (the image on the right shows an example of some of the damage that occurred). Yasi maintained a strong core with damaging winds and heavy rain as it tracked inland, and finally weakened to a tropical low near Mount Isa around 22 hours after making landfall.

Yasi was one of the most powerful cyclones to have affected Queensland since records began. The latest comparable cyclones were recorded back in 1918 at Mackay (January) and Innisfail (March). It was in fact the second major cyclone to hit north Queensland in four days, arriving on the heels of Cyclone Anthony, which crossed the coast on January 30.

Click here to see a comparison of large cyclones in recent history.

The cyclone season in Australia officially runs from November to April, however very few cyclones have occurred in November. According to the Bureau of Meteorology, Australia experiences, on average, 13 cyclones a year. Half of these occur in the western regions.

Can your name be given to a cyclone?

Cyclone names are chosen from those listed in the table below. The names start from the top of the list and alternate between male and female names. Once the end of the list is reached it begins again. Is your name on the list?